Imagine driving down the road one day with your window down. You’re enjoying a nice breeze and the radio is on. The songs aren’t your favorite but you like them because you know all of the words to almost all of them. Feeling happy and carefree.
Then it stops. Everything just stops.
All of the sudden you can’t breathe. You’re choking! Why are you choking? There is nothing to choke on! Maybe something else is happening. Maybe you’re having some kind of allergic reaction! To what, though? There’s nothing to be allergic to. Now your skin feels weird. One second you can’t feel anything, and then the next it almost feels like your skin is about to burn off. Something is wrong! Your heart! Your heart is beating so hard! It feels like it’s about to pound out of your chest. You have to find a way to pull over because you’re having a heart attack.

Scared! No, not scared.
Terrified.

Slam on brakes! skid to a stop! Say your prayers!…

This is just one of the many many situations I’ve been through in my lifetime. I suffer from a severe case of Panic Disorder. It was brought on by Obsessive Compulsive Disorder which I was diagnosed with when I was about 12 years old. You think when you’re a child that things will get better when you’re an adult. You think that adults are invincible and when you finally are one that everything will be OK. In truth my condition would yo-yo a bit. But the older I got the worse I got. I had a few good teenage years where it wasn’t so bad and I could go out and have a little fun.
Oddly enough, the OCD is under control. It’s the panic that eats me alive now.
The kind of OCD that I have is mostly obsessive; meaning that I don’t feel the compulsions like most people do. I would think of something and dwell on it. I would become obsessed with it. Like, when west nile was a thing, I was terrified to go outside. I wouldn’t go outside. There was no way that you were going to make me go outside.
Most people thought it was funny or silly. I felt humiliated and helpless. That’s just one tiny example out of the 34 years I’ve been alive.

I have a hard time eating from a fresh loaf of bread because there is no safety seal. The same with certain ice cream brands. You cannot pay me to eat it. I simply will not. There are very few people who can invite me to dinner because I will not eat just anyones cooking. When new pills are prescribed to me it takes me such a long time to get up the guts to take it. I’m afraid of taking medications because the thought of ingesting something that I cannot get out of my body is terrifying. I’m scared of Novocaine. I’m scared of hair dye because, even though I dyed my hair many times when I was younger, I may develop an allergic reaction and die. These are all things that I am scared of NOW. Which is so wonderful in comparison to the things that I used to be afraid of. 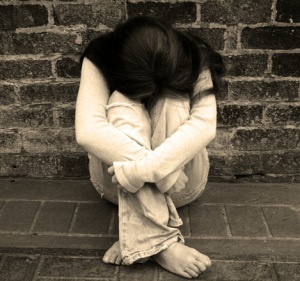 The worst part of all of it is that as soon as it hits you, you are completely and utterly alone. There is no one in the world that can help you. There is nothing that can make it better.

No one can ever understand what you’re going through. In order for them to understand it they have to experience it; and you don’t want anyone to experience it. You don’t want your worst enemy to have to face something like this.
There are a few things that ease the symptoms, though. A rubber band on my wrist. It kinda snaps your brain out of it for a while. I used to have big swollen welts on my wrist and a pocket full of broken rubber bands. Then I would use cold. A really cold air conditioner. Ice. Going outside in the winter. It would make me so cold that all I could think about was the cold.
None of these coping mechanisms work anymore. The rubber band doesn’t help me. It doesn’t phase me a bit. The cold just makes me…. well… cold.
When I was younger I made the very wrong assumption that people were generally “good” and would understand that I had some issues that maybe needed a little more attention. Well maybe not attention so much as a little more exceptopm.

It turns out that people just suck. Because of their past experiences a LOT of people, including my now ex-husband, thought that I was faking it (he doesn’t think that anymore, BTW). But, you can’t fake terror. I even have some people that I guess I am technically related to that also do not believe me. Which is fine because, in all honesty, they have their own problems.

The people that believed that I really had a problem just felt helpless. How do you comfort your daughter who is crying in a corner in her room because she’s afraid to walk out of the door? How do you tell her it’s going to be OK when you don’t even really know what the hell is going on? Believe me, though, even when you don’t understand what’s going on with someone who is suffering from something invisible, the fact that you stay there, no matter what, matters.
I was told many times by people to just stop. Just get over it. I know that they weren’t aware of how inconsiderate and ignorant their words were. However, after a couple years I just learned to keep my mouth shut. I didn’t mention anything about the Panic Disorder  unless there was some kind of pressing reason. I knew what people would think of me. I knew the things they would say when they thought I couldn’t hear them. So I just didn’t say anything. I have so many friends, even now, that I’ve never mentioned it to. Until right now.
I honestly feel like there is a monster inside of me (mostly metaphorical, ‘cept when I’m having my monthly, then it’s literal). When the panic attacks were controlling me, there was nothing I could do. There was nothing that could be said. There was nowhere safe. So that’s what happened to my life.

Everything became nothing. I had people who loved me but I couldn’t go places with them. Because this monster would pull me back. It would remind me that it was there and that if I went somewhere that it was going to get me. Worse, it was going to get me in front of everyone. They would see.
I turned into a recluse. I couldn’t be left home alone and I couldn’t go anywhere alone. I would have to have a “babysitter” if anyone went anywhere. My family would cater to this because they had no idea what else to do. Mostly because I wouldn’t let them out of my sight.
Terrified.
I knew I was a burden. The ones that loved me always told me that it wasn’t true. But when your best friend has to change the day that she goes grocery shopping to better suit your phobia, you’re being a burden.
Situations like this will show you who your real friends are. They are the ones that are there when the dust finally clears.

I was having 4 – 10 panic attacks a day. It was exhausting. Even now, I have high levels of anxiety and I’m always hyper aware of everything which seriously takes a toll on my daily stamina.
During my years of depression I had a few relationships. Because I needed to be medicated, I needed insurance. Because I needed insurance, I needed to apply for disability. For some reason there are these human men (and women) that are called “losers”. These “losers” like to find women that are insecure and live off of them. Unfortunately for them, it didn’t take long for me to catch on. I might have been insecure but I wasn’t stupid.

But being in more than a few bad relationships did convince me that I was always going to be alone. Who would love someone that can’t even stay home alone for 10 minutes? How could I ask someone to love someone like me? I’d given up. I was 32 and I didn’t care anymore. I was just going to exist until I didn’t have to anymore.
Skipping all of the lovey dovey stuff, I met someone who loves, believes, and supports me to no end. He has children. I now have a family. I have a reason to be better.
I wanted to be better for the first time in a long time. The monster in me was not expecting this because she’d won so long ago. I started researching coping mechanisms again. Then I realized that coping with something isn’t really dealing with it. I don’t want to cope with this monster! I want to kick her in the face! I need her to back off! I needed my life back!
So I started to research how others had overcome their Panic Disorder. How did they get their power back? What did they do?
I started seeing the BEST therapist. The first one that told me what was going on was OK. It was just my body doing what it’s supposed to do, it was just doing it for no reason. Or the wrong reasons. He assured me that a panic attack cannot kill you. And it can’t. It’s almost like your brain has a short. The wiring is broken. That is NOT your fault. You can’t help how you’re made. I’ve learned not to fight it.
Don’t fight your panic attacks! Yes, you read that right! I am no doctor. I haven’t a degree in anything. I just know this from experience. Do not try to stop the panic. Accept that it’s going to happen. Accept that it’s happening. Then, know that it’s not going to last.

I’ve found that when I tell the panic attack to “bring it on!” that it’s less severe and it doesn’t last as long. Every time you do this, you get a little bit of your power back. A little bit of who you really are comes back.
I am still working on it. I am not functioning like a normal human being by any standards. I am, however, staying home alone now. I can drive a couple miles down the road for things that I may need. I can take my kids (my new family) places. I can take care of them. I am getting my life back. I wish it was a faster process but my progress is unbelievable! I am so proud of me!
Below is a link to some helpful websites that may be able to help those who suffer from Panic Disorder, and those supporting sufferers, to get a better understanding of the whole process and learn to face it! It’s such a wonderful feeling!

This link is good for understanding signs and symptoms:
http://www.helpguide.org/articles/anxiety/panic-attacks-and-panic-disorders.htm
Here is a link explaining some of the mistakes we make when it comes to panic attacks:
http://www.calmclinic.com/anxiety/mistake-that-makes-anxiety-worse
This link is THE MOST helpful I’ve ever found, and helped me begin my healing process:
http://www.anxieties.com/6/panic#.Vui4YUeZNl0